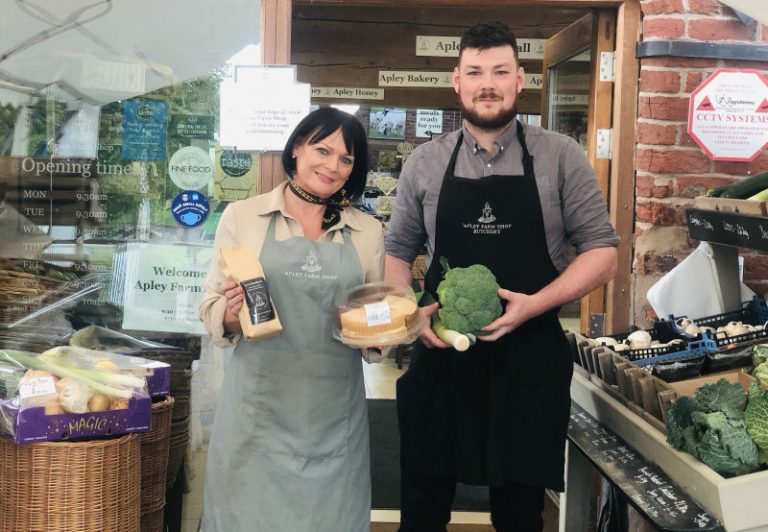 In the year it celebrates its 10th anniversary, Apley Farm Shop in Norton, near Bridgnorth, has been listed among the Top 30 Farm Shops nationwide by national newspaper The Times, in its latest listing.
The Apley Farm Shop attracts visitors from all over Shropshire, the Black Country and beyond. It’s a vibrant home for independent retailers including a garden centre, a florist and a gifts and homewares store, plus it offers a wide range of indoor and outdoor family activities such as Scotty’s Animal Park, a pottery, painting and craft studio and the popular Apley Kitchen café and Play Barn. The Farm Shop itself sells the very best locally sourced, fresh produce, with The Times singling out the beef from the Estate’s herd of British White Cattle as being a notable feature. The in-store butcher, delicatessen and bakery all combine to make it a destination local people have valued for years as it now takes its place on the national stage alongside other distinguished farm outlets such as the Chatsworth Estate Farm Shop in Derbyshire, Daylesford Farmshop on the Bamford Estate in Gloucestershire and, closer to home, Ludlow Farm Shop. Graeme Manton, estate director of Apley, said: “We are delighted and proud to be singled out and hailed as one of the best farm shops in the country by a national newspaper.  We’ve always known we had something special but it’s great to have it recognised nationally and to join some illustrious company. “Our loyal customers and dedicated, enthusiastic staff must be given enormous credit for making it the success that it has become over the last 10 years. This is underpinned by our focus on the environment in cutting packaging waste and lowering food miles by stocking local, sustainably sourced produce.”